With record inflation now squeezing US household budgets, you can thank our Senior Fellow Emeritus Steve Entin for protecting American workers from being pushed into higher tax brackets. If there ever was a paycheck protection program, defending people against slice creep is perhaps the most important ever devised.

It all started forty years ago. After Ronald Reagan was elected president, Steve Entin, who had previously served as an economist with the Joint Economic Committee and had studied under renowned professors such as Milton Friedman at the University of Chicago, was asked to work in the Treasury Department as Deputy Assistant Secretary for Economic Policy.

As many Tax Foundation members can attest, Steve’s stories of his time in the Reagan administration are legendary, but one stands out. Steve did something every American household should be grateful for: he convinced President Reagan to call for indexing the tax code to inflation.

At the time, American taxpayers were subject to bracket drift, which occurs when inflation pushes taxpayers into higher tax brackets or reduces the value of credits, deductions, and exemptions. The bracket thresholds have not kept pace with inflation, leading to an increase in income taxes without an increase in real income.

Indeed, President Reagan used the chart Steve had drawn for him in a televised address asking Americans to call their congressmen and demand that they index the tax code. People did. And it worked.

President Reagan gives a televised address from the Oval Office, outlining his plan to cut taxes in July 1981.

It would be interesting to go back and estimate how much indexation has saved American taxpayers since the 1980s, especially in recent months with near-record inflation.

And the benefits of a tool like inflation indexing are not limited to federal tax policies alone. As our experts have pointed out, it can also protect taxpayers at the state level. In fact, half of the states build a cost-of-living adjustment into their income tax brackets, standard deductions, personal exemptions, and other features of their tax codes.

Steve had another notable contribution to tax policy: the popularization of “dynamic scoring” – the concept that policy makers must consider the impact of taxes on the economy when analyzing a tax bill. .

After his time at the Treasury Department, Steve went to work under legendary tax economist Norman Ture at the Institute for Research in the Economics of Taxation (IRET). Steve would go on to become President and CEO of IRET while developing a simple and dynamic tax model with Mike Schuyler.

At that time, the dynamic analysis of tax bills was considered “voodoo economics”. The conventional way of assessing tax bills was to ignore their economic consequences and consider only whether the bill would increase or reduce revenue. People scoffed at the idea of ​​measuring the impact of taxes on the wider economy and what impact that would have on the actual amount of tax revenue collected.

Steve’s point, of course, was that taxes have a big impact on the cost of capital and people’s willingness to work, save and invest. Ultimately, these factors determine the size of the economy. For Congress, ignoring these effects was legislative malpractice.

Dynamic scoring estimates the effect of tax changes on key economic factors, such as jobs, wages, investment, federal revenue, and GDP. It provides legislators with more context they can use to understand the effects of tax policies on a complex, multidimensional U.S. economy by considering the macroeconomic and behavioral effects of a policy, whereas conventional scoring simply predicts the increase or the decrease in income.

Taking into account these behavioral and macroeconomic changes within the framework of a dynamic rating moves the tax debate beyond a simple argument on How many revenues that we should raise to a larger debate on how should we increase income.

Building one of the most robust tax models in the country

Steve and his colleague Mike Schuyler joined the Tax Foundation in 2011, bringing with them a simple and dynamic tax model that they had been developing for years. Since then, the Tax Foundation has made it a priority to make dynamic modeling a reality.

Building on Steve’s legacy, the economists and software developers at our Center for Economic Analysis have significantly developed one of the most robust (and reliable) federal dynamic tax models in the nation, and we have thus changed the fiscal world.

For example, dynamic scoring of the Tax Cuts and Jobs Act of 2017 (TCJA) helped raise awareness among federal policymakers of the importance of better cost recovery, leading them to temporarily shift to the full accounting for capital expenditures in addition to reducing the federal corporate tax rate.

Today, Steve’s perspective on the impact of taxes on the cost of capital and economic growth is incorporated into our macroeconomic model on taxes and growth. And its lessons continue to influence how our economists assess tax policy every day.

We felt that the best way to recognize Steve’s lasting contributions to American taxpayers and to this organization was to establish a permanent position here at the Tax Foundation, the Steven J. Entin Fellowship in Economics. Steve was flattered to be so honored. 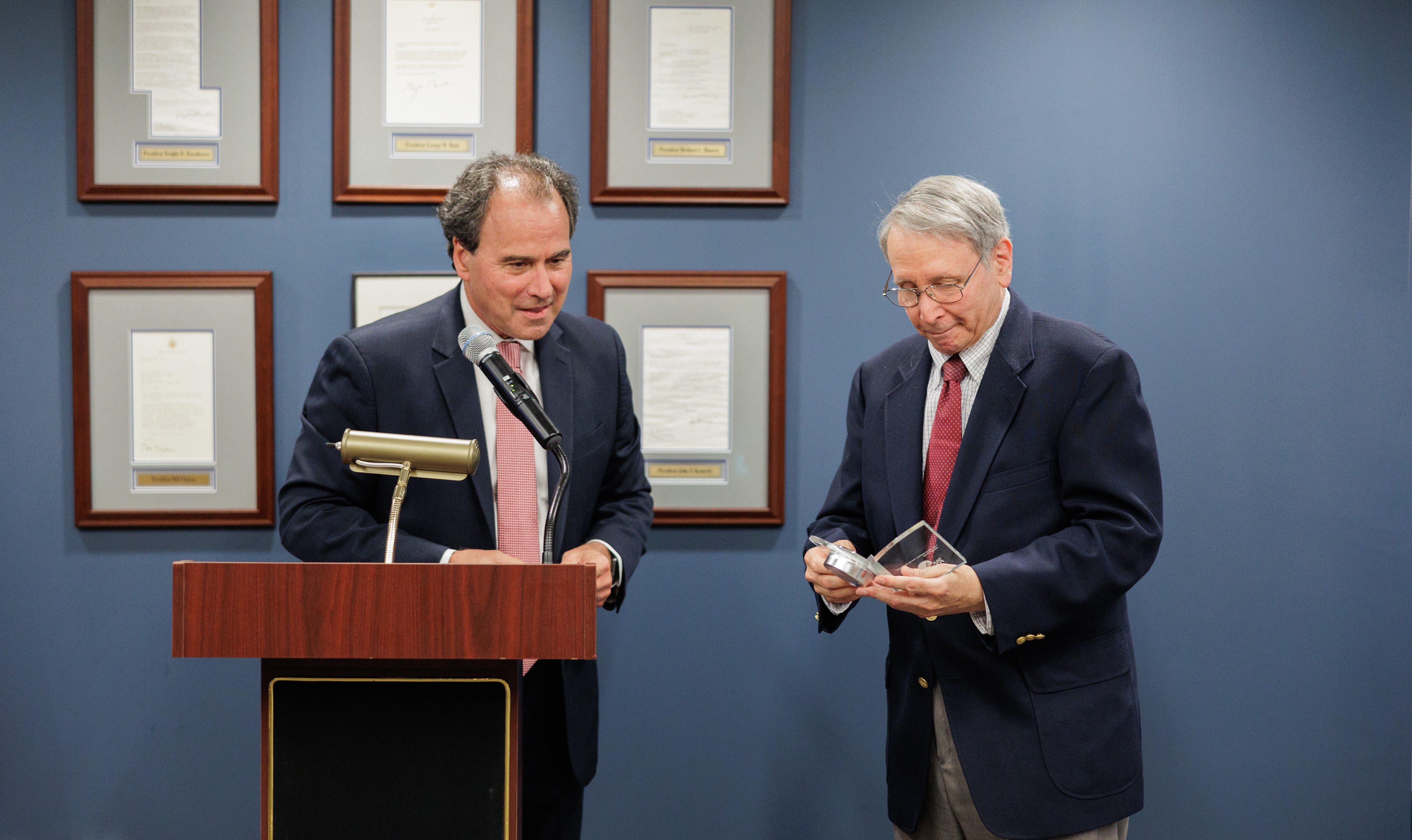 Senior Fellow Emeritus Steve Entin is recognized for his distinguished legacy at the Tax Foundation headquarters in Washington, DC in July 2022.

With the scholarship in place, we wanted to fill it with someone who would continue to uphold Steve’s principles of sound tax policy. That person is Will McBride, the Tax Foundation’s vice president for federal fiscal and economic policy. Will leads our modeling and analysis of federal tax policy and maintains the intellectual standards of these efforts.

Will received his Ph.D. in Economics from George Mason University. Will served as our Chief Economist from 2011 to 2015, before taking a role with PwC’s economics team. Will returned to the Tax Foundation in 2020.

We are delighted to announce that Will is the first Steven J. Entin Fellow in Economics. Congratulations to Will and Steve for the well deserved honors.

And kudos to a rich legacy of smarter, healthier tax policy that continues to this day.

We are open to other appointment opportunities at the Tax Foundation, including named positions and programs. To learn more, please visit 1937society.org.

Co-presented by the Ergo Foundation and

Singapore, Singapore, April 20, 2022 (GLOBE NEWSWIRE) — Ergo Hackathons have become a main and defining feature of the community over the past year. In a short time, ErgoHacks have helped create tools and dApps that are now key parts of the Ergo ecosystem infrastructure. Although these events started out as competitions, one of the […]

The Luna Foundation Guard (LFG) has raised $1 billion through an over-the-counter sale of LUNA, the native token of the Terra blockchain. The raise, one of the largest in crypto industry history, was led by Jump Crypto and Three Arrows Capital, with participation from Republic Capital, GSR, Tribe Capital, DeFiance Capital and other investors anonymous. […]