Navjot Altaf’s practice lies at the intersection of art and activism.

Featuring site-specific installations, sculptures, videos, drawings and photo prints, the exhibition showcases the artist’s long-standing commitment to issues of climate change, ecology and feminism and the challenges they face in the digital age.

Her practice is at the intersection of art and activism. With a career spanning over five decades, she is one of the leading voices of her generation to consider art as a means of social change.

Formerly based in Mumbai, she moved to Bastar in the rural districts of central India (State of Chhattisgarh) in the late 1990s, to work with artists and indigenous communities who witnessed massive deforestation. , mining, pollution and displacement.

Through collaborations with artists, activists, workers and organisations, her projects trace the complex links between human exploitation and the environmental crises that lie at the heart of climate change.

Pattern features works created since 2015, the year of the United Nations Climate Change Conference and the Paris Climate Accords.

These events marked a turning point in the announcement of a global agreement on the mitigation of carbon emissions levels between nearly 200 countries. 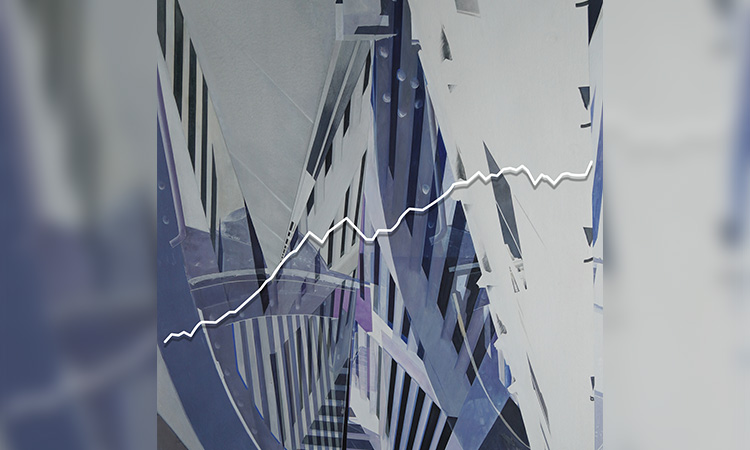 Navjot Altaf’s work entitled How Perfect Perfection Can Be, US Fossil Fuel Emissions 1900-2020.

Since then, there has been a dramatic improvement in the visual representation of climate change in mainstream media, using new technologies and real-time data.

The exhibition at Ishara juxtaposes new and traditional forms of representing environmental crises to reflect on how we think about the future of the planet and society.

Composed of six bodies of work, the viewer is first confronted with How Perfect Perfection Can Be, an immersive presentation of multi-layered works comprising prints, watercolor drawings and PVC transfers, which reveal the paradox between the great achievements of modern architecture and their undesirable effects. impact on the planet.

The adjoining wall amplifies the statistical information seen in previous work in bold lines that follow seven indices of ecological disasters collected from 2011 in the work titled Seriousness of Issues.

According to Altaf, the abstract representation of the environment has dehumanized our approach to fully grasping the scale of the devastation and displacement of several species caused by the over-industrialization of several decades.

Lost Text is a series of 36 layered digital prints that creates a dialogue between archeology and new data mining techniques.

Photographs of ancient hieroglyphics are juxtaposed with digital ciphers generated from a corrupted computer hard drive containing documentation from the artist’s Bastar journals.

Exposed to the ground, the use of rice and the invocation of textiles symbolize the interconnectedness of artistic expression, occupation and livelihoods and the dependence on the land of farmers who have lost their land to the mining companies.

Soul Breath Wind is a multi-channel video based on Altaf’s extensive research and first-hand observation of how political, economic and development policies have led to deep geological impact in Chhattisgarh.

The video features the testimonies of local residents, including several women speaking out against land monopolization, rapid industrialization and the extreme conditions of displacement and deforestation caused by coal and bauxite mining.

It continues in the final work of the exhibition titled Patterns Which Connect, a collection of 24 fossil sculptures embodying the diverse ecosystem that is under threat due to the ever-changing landscape.

The exhibition at Ishara highlights the multiple dimensions of Altaf’s practice through her works, as well as a reading space on the mezzanine that features books, field notes and posters from various social movements including her has been part of over the years.

The exhibition is curated by Sabih Ahmed, Associate Director and Curator at the Foundation. It is accompanied by the launch of a new two-volume book titled Navjot at Work and Artist’s Notes; physical and virtual visits; educational and public programs; a newly commissioned text by Zasha Colah and artist conversations throughout the duration of the exhibition.

Smita Prabhakar, Founder and President of the Foundation, said, “Once again, Ishara showcases a contemporary artist from South Asia never before seen in the region. Navjot is a feminist and a firm believer in the intrinsic values ​​of equality and non-discrimination against minorities. Altaf was born in 1949 and currently lives and works between Mumbai and Bastar. Since the 1970s, her practice has negotiated various disciplinary boundaries involving painting, photography, sculpture, installation, video, site-specific work, research and activism.

Ishara Art Foundation was founded in 2019 to support emerging and established practices that advance critical dialogue and explore global interconnections.

Prabhakar has been an entrepreneur, collector and art patron based in the United Arab Emirates for over four decades. She is a member of the Advisory Board of Art Dubai and a member of the South Asian Acquisitions Committee of the Tate Modern (London), the Middle Eastern Circle of the Guggenheim Museum (New York) and the Peggy Guggenheim Collection (Venice).

TORONTO – The Weston Family Foundation selected an international panel of expert judges for its $33 million Local Innovation Challenge. The panel will be chaired by Dominic Barton, former chair of Canada’s Economic Growth Advisory Council. The Homegrown Innovation Challenge was launched on February 8, 2022 to catalyze innovation by providing solutions to solve the […]

HANOI, VIETNAM –Direct News– HANOI, VIETNAM – Media Outreach – March 24, 2022 – As part of the animation sequence of the second season of the VinFuture Prize, VinFuture Foundation officially launched a series of six webinars in six different time zones around the world. This series of events aims to provide information directly to […]

New webinar series aims to improve education and training opportunities for financial advisors and will qualify for CE credits Washington, DC, Aug. 10, 2022 (GLOBE NEWSWIRE) — The Foundation for Financial Planning (FFP), a 501(c)(3) nonprofit organization dedicated to expanding access to pro bono financial planning for those in crisis or in need, is partnering […]